The crocodile's teeth, an attempt at creative writing 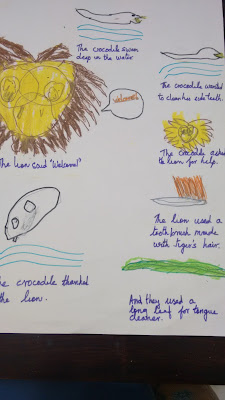 A story told by Ramam, with some inputs from me. He began the story saying there was a crocodile and something  got stuck in it's teeth. The crocodile wanted to remove it.  I asked him how to go about it and he suggested using a tooth brush. I said neither the crocodile has hands or tooth brush, We  had recently read a passage on invention of tooth brush, where earlier people used animal hair for the brush. So he suggested we use  tiger's hair and the lion could brush the teeth for the crocodile. The story ends with a simple " Thank you" and  "welcome" by the crocodile and lion respectively.
Posted by viji at 3:07 PM

Nice blog... Thank You for sharing.
There a workshop is happening every month in Bangalore. Here is the link
http://horticulturaltherapy.in/ht-for-autism/

Will spread the word:)

Hi,
Hope you find the blog worth your time.I shall greatly appreciate it, if you can take some time to leave your valuable comments. You  are most welcome to share any new receipes, resources or thoughts in the blog. The Internet has been our constant companion in our battle against autism.And so this blog,  in some ways, is like giving back to the virtual world. My day is made if I have been able to help some of you....
Good luck and three cheers!

Links to More on Autism

Customized for our kids

Books to look out for