For those of you who have seen Hrithik Roshan’ s Koi mil gaya there is a scene in which preity zinta’s mother offers him tea/coffee. He proudly states that he has had bournvita (yes, of course he is also endorsing the brand).Recently I had a friend of mine over, at my place. That is how he addresses me, and at that he is a very “special” friend of mine. I asked him what he would have to drink. He stated he just had milk. And at that instant of time this scene flashed across my mind, maybe the script directors borrow from real life. This friend of mine can comfortably have a conversation; go on his own independently from his place to mine. He is a gentle man to the tee. As my husband remarked, if Ramam reaches anywhere close to him when he grows up we should be very happy.
Posted by viji at 9:27 AM No comments: 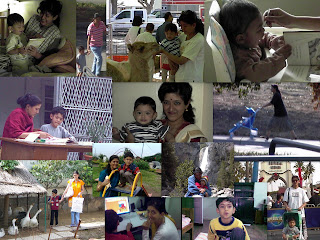 I decided to hang up my uniform and relocate to Bangalore. This should provide stability to Ramam's life which otherwise is subjected to continuous transfers. While they are getting adjusted to their new life, I thought i should chip in and add a few lines to the blog. A picture is better than a thousand words they say. And so .. thats it .. the journey of Mom and her son, student, companion, life :-)
Posted by Mohan at 10:17 AM 2 comments:

This is about my little daughter Isha. The dynamics of our mother daughter relationship is changing all too fast. The other night she had gone to sleep and she woke up just to keep me company for dinner. I caught her reprimanding the maid for sweeping away Ramam’s line ups. She howled at another lady for shouting at Ramam. But that is where she draws the line. Her Barbies are strictly hers, amma is hers, and appa is Ramam’s. We talk about change affecting our kids, but I saw my daughter coping bravely with it. She was trying to get friendly with a gang of girls in the society we had moved in. She came back complaining that they were not sharing their toys with her. Then she turned around and “ordered” me to get her new toy. She immediately rushed back to her new friends and did a PR exercise that would have put marketing gurus to shame. She is fast becoming my best friend. She is very understanding of his problem and introduces him to her teachers and friends alike. She is the only friend Rama has so as to speak.

The other day we were driving through one of the flyovers in Bengaluru when Ramam pointed to a poster of the film New York. I asked him if he liked the songs of New York. The next day again I elaborated that there is katrina, John Abhraham in the movie. The third day I just nodded acknowledgement. The fourth day something told me to look closer and I saw there was a small Ganesh under a tree beneath the poster. When I told him this, his face lit up with a big smile. This is what he had been trying to tell me from the day one. I felt a little ashamed. I was also happy he was trying to strike a conversation about something. This happened again one other time when we were driving past vidhan soudha and I pointed it to one of our guest. As the car took a u turn and came on the other side of the building he pointed it out to me and said vidhan. On another occasion, he wanted a particular spoon, to drop and play with it as he was enjoying the clatter it made. He typed out Spoon for soup. Then I told him there is no soup, and again he insisted on the spoon. Then I realized what he was trying to say I want soup spoon. Similarly when he brings the same story book to read again and again it is just for company sake. He is at a stage, where he is desperately trying to engage himself and not knowing how to do it.

Hi,
Hope you find the blog worth your time.I shall greatly appreciate it, if you can take some time to leave your valuable comments. You  are most welcome to share any new receipes, resources or thoughts in the blog. The Internet has been our constant companion in our battle against autism.And so this blog,  in some ways, is like giving back to the virtual world. My day is made if I have been able to help some of you....
Good luck and three cheers!

Links to More on Autism

Customized for our kids

Books to look out for